How To Treat International VIPs To Authentic Kabuki in a Private Space!

With the continuing globalization of business, opportunities to entertain important clients and customers from overseas are increasing year over year, aren’t they?

In this age where all information is available online, it’s rare to have guests who don’t already know a thing or two about Japan, even if it’s their first time visiting.

However, since they’ve come all this way, a lot of executives and managers want to show them the very best experience possible.

“But, what kind of experience would they like to have?” If you’re asking yourself this question, let me tell you the many charms of Japan’s ultimate live experience, “Kabuki.”

A Simple Explanation of Kabuki

A Performance Created By A Woman

In 2009, UNESCO named kabuki as a part of Japan’s ICH (Intangible Cultural Heritage).

Nowadays, there are kabuki performances with all-male casts. But it was actually originally created by a woman named “Izumo No Okuni” during the Edo Era, who famously disguised herself as a man.

Nowadays, there are many different types of performances, including those with all-female and all-children casts. However, the most popular are the male-only performances. 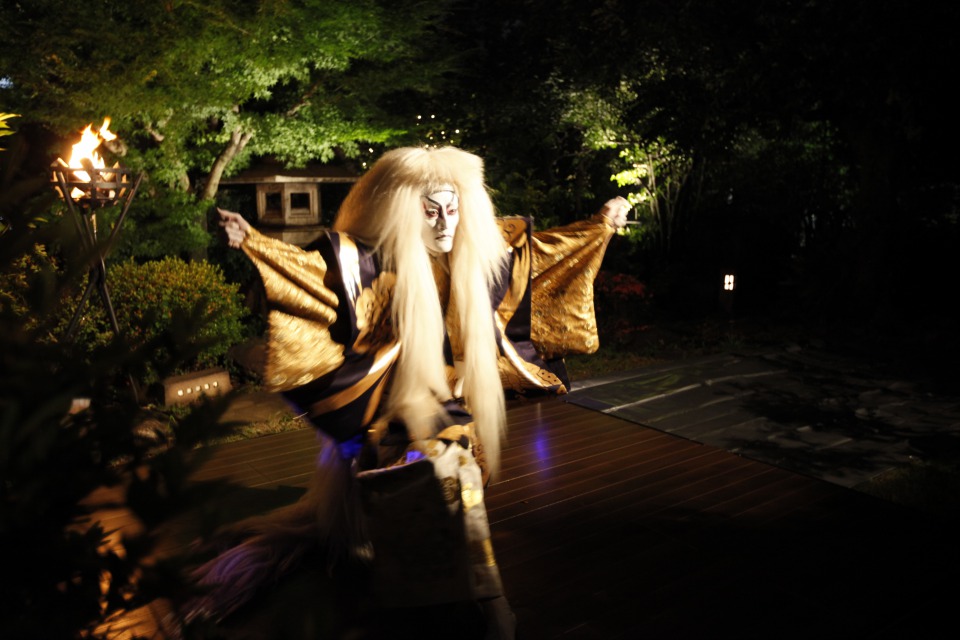 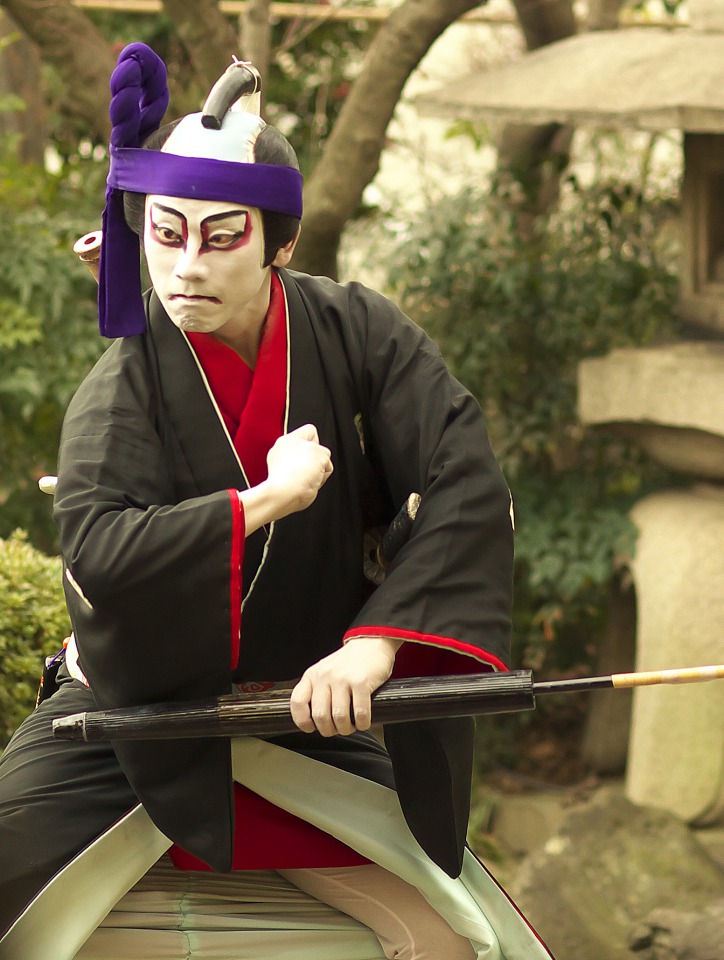 The term “kabuki” comes from the Japanese word kabuku.

Kabuku means to have eccentric behaviour or a striking appearance, and those types of people were called kabukisha.

These kabukisha wore showy, gorgeous clothes, and drew attention as they walked around town. Even though their speech and behaviour were rough and wild, people aspired to be like them.

In a way, you could say they were a lot like today’s rockstars.

Plays based on these kabukisha were called “kabuki.”

Because people looked up to kabukisha, they rushed to see these plays based on them, and kabuki immediately became a big hit. 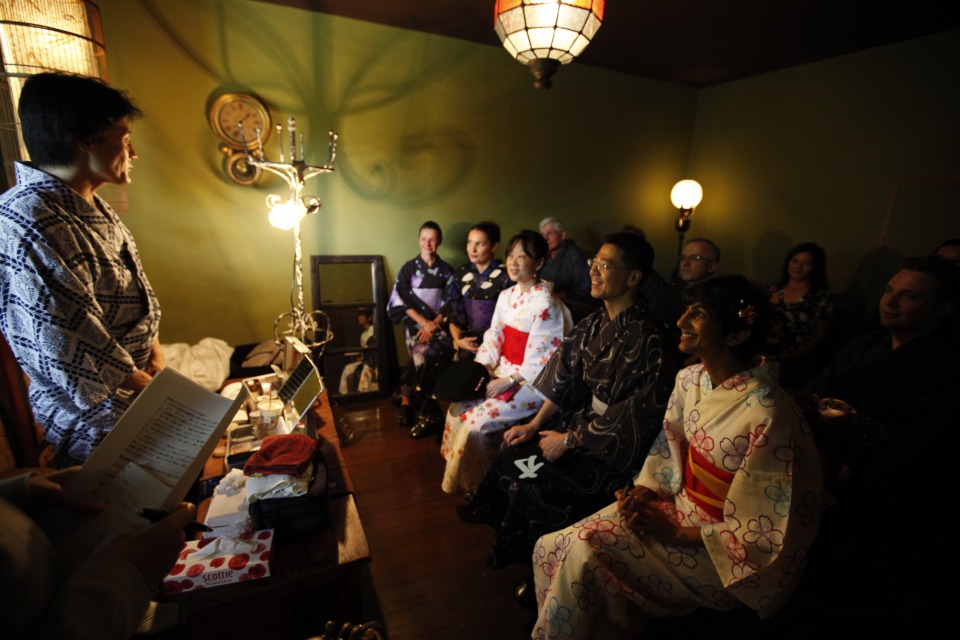 The characters used to write kabuki can be interpreted as “music, dance, acting,” which are the three main pillars of kabuki.

More than anything, the visual impact of kabuki is the most striking.

The gorgeous multi-coloured costumes are like an exquisite piece of art.

The white makeup on the performers’ faces, accented with thick lines, are another unique aspect.

Moreover, the “posture” of the actors involves expressions and body movements that you won’t see anywhere else.

Even putting aside the many other distinct characteristics of kabuki, just the fact that you won’t see these types of visuals anywhere is a special quality in itself.

Kabuki From a Non-Japanese Perspective

A Japanese Cultural Icon That Can Be Seen In-Person 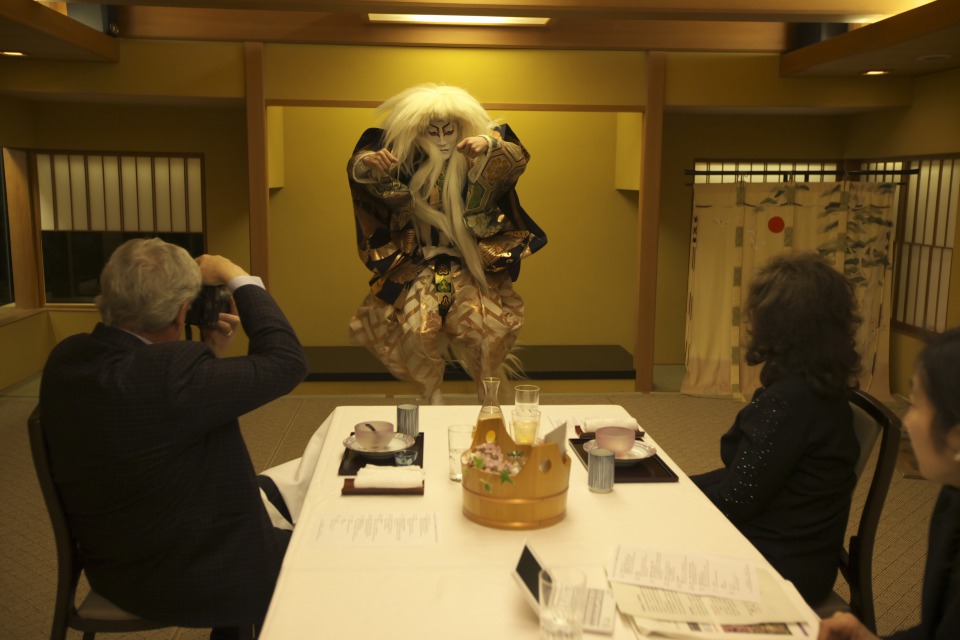 Kabuki is one of the many Japanese cultural icons that have been spread across the world, including ninja and samurai.

The costumes, makeup, accessories, and stage decoration are all based on a Japanese aesthetic.

Even without the movement or the sound, as a Japanese cultural icon, it has a strong presence.

There is an important fact that distinguishes kabuki from ninja and samurai. That being, even in the current era of Reiwa (The reign of the latest Emperor which commenced in 2019), kabuki is still carried on as a profession, and you can go see the performances in person.

Overseas interest in Japan is always increasing, and even now, kabuki stands as an iconic Japanese product.

The Impression of Difficulty

On the other hand, even among Japanese people, kabuki has the image of not being a casual form of entertainment. Many international tourists tend think of kabuki as unapproachable.

However, kabuki was originally meant to be mass entertainment for the common people.

In fact, in the past, the upper classes, such as nobility or samurai families, were not even allowed to watch kabuki, since it was meant for the common people.

But because it was so popular, nobles would dress up as common people in order to sneak in and watch, so gradually social status stopped being relevant to the enjoyment of kabuki.

Disregarding the history, this impression of difficulty comes from the fact that most of the stories take place during the Shogunate or Edo eras, and so knowledge of the history and culture of those eras are necessary to enjoy it. If you go in blind, it can be difficult to understand the contents.

However, Kabuki is “Cool Japan” 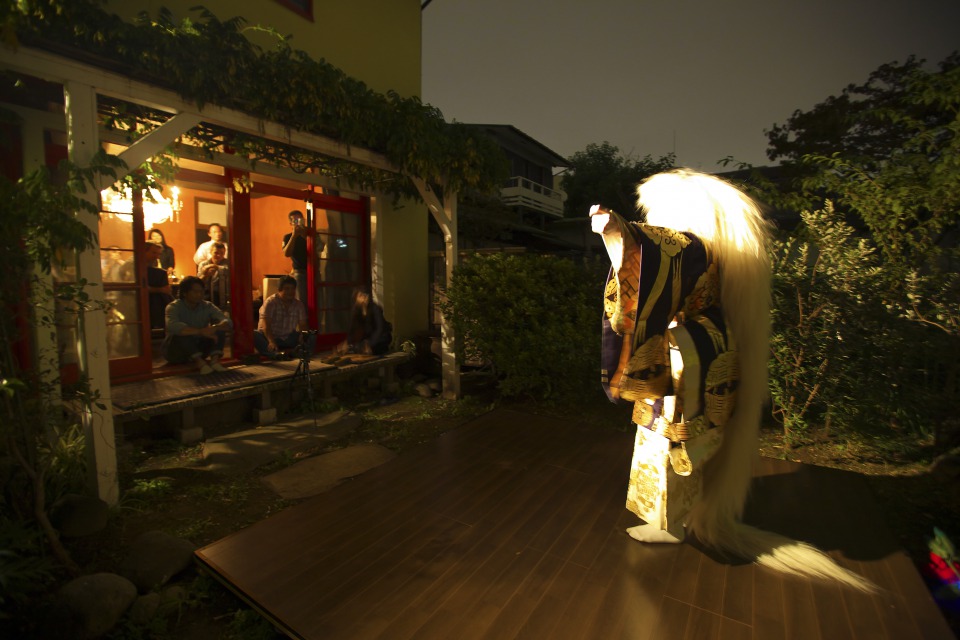 “If Kabuki seems unapproachable even to Japanese people, is it really okay to recommend it to customers from overseas?” You might be having this concern. But don’t worry, it’s okay.

As I mentioned before, the main pillars of kabuki are “Music, dance, and acting.”

Music and dancing can be enjoyed by anyone from anywhere in the world, even if they don’t understand the words.

The visuals and the content in kabuki are intrinsically connected, but in reality, the music, sound effects, and footsteps you hear; and the audacious movements, unique expressions, and stage decorations you see are enough to provide an enjoyable experience.

“But I want them to enjoy the drama too!” For the people who are thinking this, I will now introduce a few pointers that will help you achieve that goal.

How To Enjoy Kabuki With International Guests 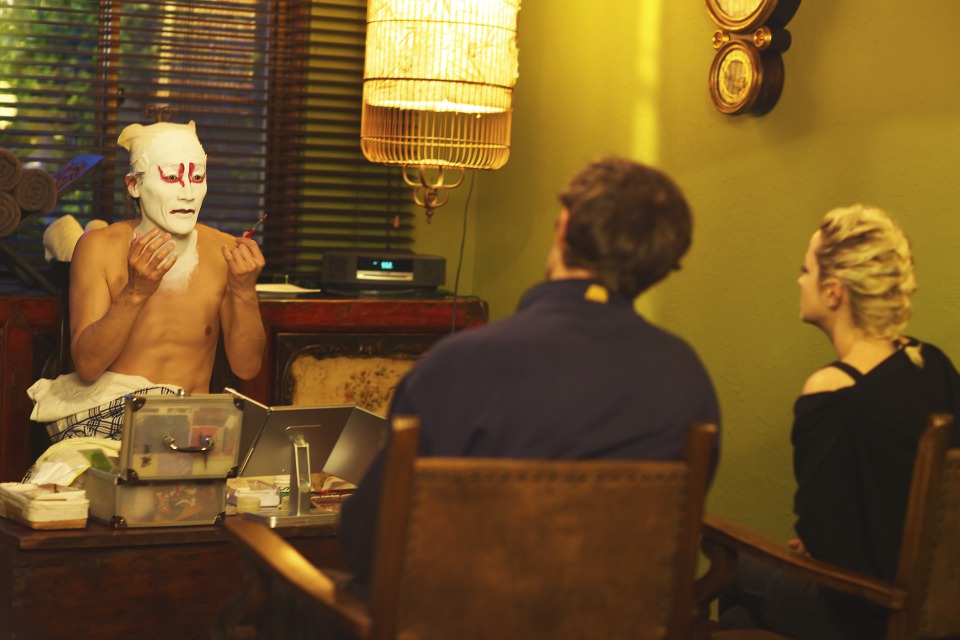 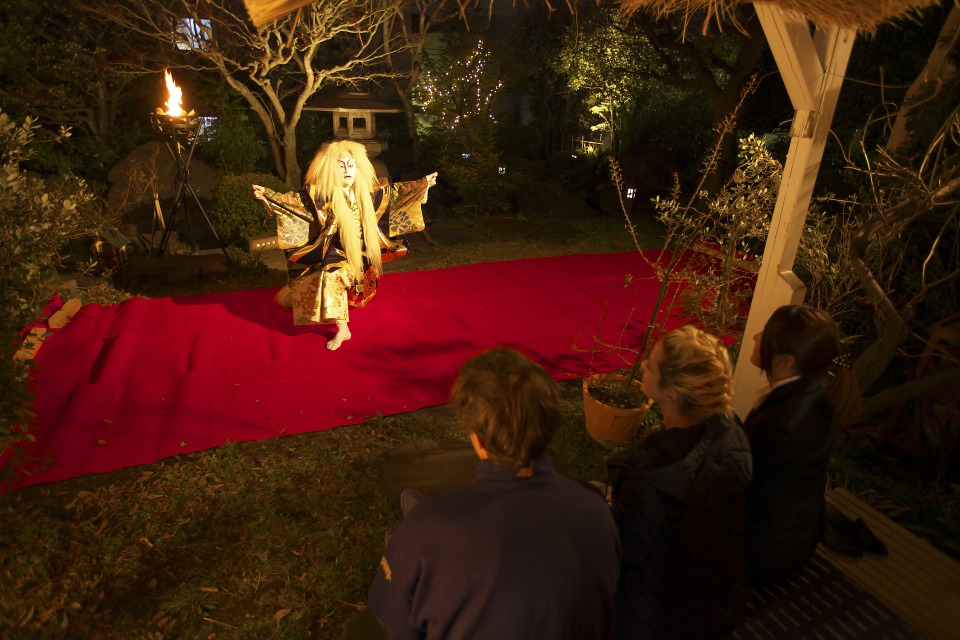 You want to treat your overseas visitors to a wonderful experience. You want them to enjoy kabuki.

For that purpose, there are two fundamental things you must do.

– Explain the manners of appreciating kabuki

Even though it’s entertainment for the masses, there are still certain manners that should be explained beforehand.

If they’re a VIP, it’s likely that they will already know the general etiquette of going to the theatre, but it’s best to explain anyway, so that they can appreciate the play without worrying whether they are going to commit a blunder.

In order to remove their worries, this is an important point.

– Explain the synopsis of the performance they are going to see.

The first step is to choose a performance that you think your guest will be interested in.

If they have an interest in classical music, then a classic play would be best. If they like anime, then they would enjoy a play based on a popular anime.

If you explain the general story beforehand, then they can appreciate the play even if they don’t understand each individual line.

There are also English audio guides, which can be very helpful.

### Let Them Try On Kabuki Costumes and Makeup

If you can’t put together a schedule to actually see a performance, then there is another way to let your guests enjoy kabuki.

By all means, take them to try on kabuki costumes and makeup.

There are a lot of international tourists who want to experience Japanese traditional clothing.

Because kabuki costumes and makeup are particularly unwieldy, rent a private room and hire a costume or makeup artist. This luxurious experience will leave your guest with a very special memory.

It will also further their appreciation of kabuki. Having experienced just how heavy and unwieldy the costumes are, they will be impressed by the elegant ease with which the actors glide across the stage.

Make Sure to Take Pictures 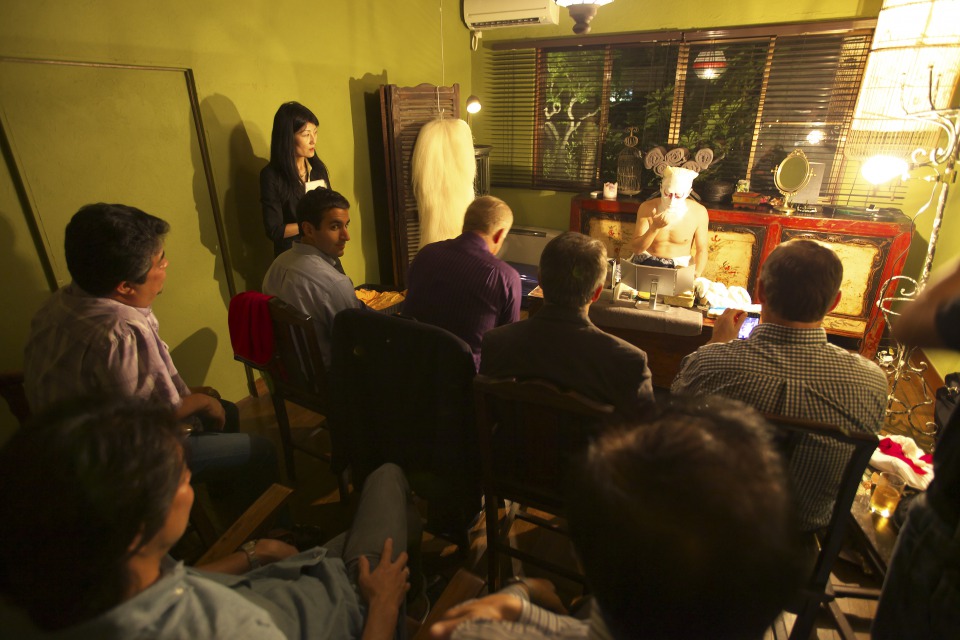 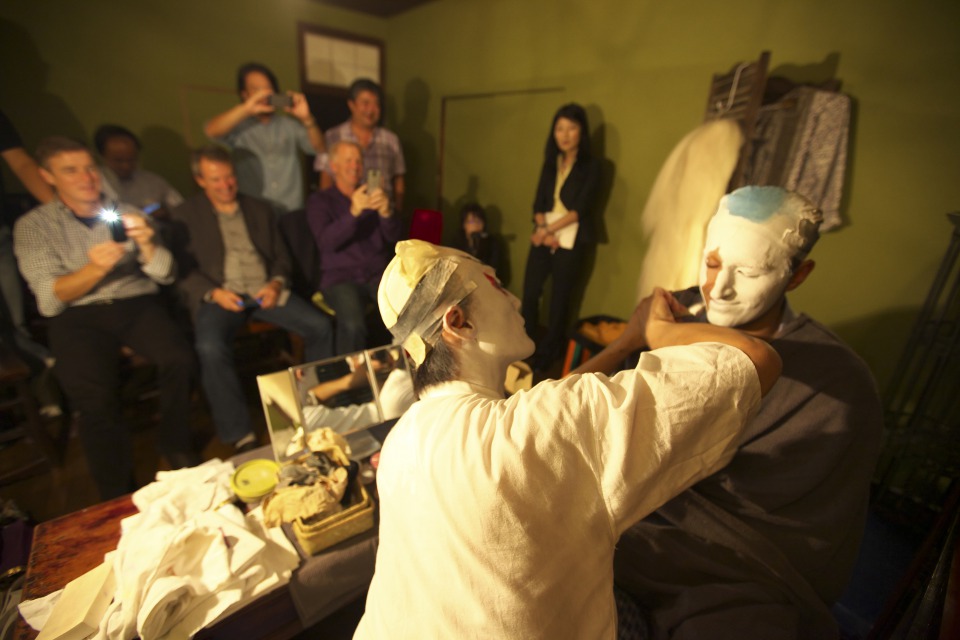 Whatever people say, the visual impact of kabuki is its most striking element, so don’t forget to take lots of photos

Your guests will want photos with the performers, and if you do take them to experience the costumes and makeup themselves, they will appreciate if you take lots of photos for them.

Surely, when they look back on those pictures, they will remember their exciting experiences in Japan, as well as the gracious hospitality they received.

The popular and respected art of kabuki is now not just available in Japan, as there are performances held overseas and across the world.

However, visitors to Japan will want to enjoy the atmosphere of the authentic experience.

For the important customers with whom you want to build a long-lasting relationship, the audacious and delicate performances of kabuki actors, and the experience of trying on the costumes and makeup themselves, will leave them with lasting memories.

The time you spend enjoying kabuki will be remembered as a precious time by both you and your guests.